Ninety-nine years ago in 1920, during its annual National American Women Suffrage convention, six months before the 19th Amendment was passed, President Carrie Chapman Catt founded the League of Women Voters.  Born out of a desire  to arm women with the knowledge and skills to vote intelligently, the League is proud of the fact that it is non-partisan.  Non-partisan it may be, but it always stands for democracy and encourages its members to work for rights and “reforms” for all citizens.

Last fall, I was asked to speak  at the birthday party, February 16, 2019, for this unique group in St. Cloud.  Coincidently, I had just researched another of the National American Women Suffrage presidents, Anna Howard Shaw, for a paper I received a grant for to research and write about the Minnesota’s first fully-ordained woman Methodist minister.  Mary MacNicholl worked her way through college at Pennsylvania’s Temple University to earn an educational degree and then turned missionary for a number of years before her father died in 1942.

Why did she wait until her dad died to attend seminary since she had prepared herself since youth to become a minister–no drinking, no dating, no dancing?  One reason could have been because he disapproved of  women  ministers; another was because of money.  Attending Drew University, in New Jersey, was going to be expensive.  With all her experience teaching and money she had saved, she was able to attend divinity school.  She was a serious student who was willing to live in a dorm at the age of 30+ to work toward her goal.

So was Anna Howard Shaw. Born in 1847, she came from England when she was four years old to live in Michigan in a log cabin, far away from neighbors, stores, and a post office. She, too, felt an early call to preach.  She  graduated from Albion College, and then, after years of financial struggle, earned her divinity degree from Boston University.  Yet, the Methodist Episcopal Church refused her ordination because she was a woman.  She appealed to the Methodist Protestant Church, and became the first woman to be an ordained Methodist minister–anywhere.

She wasn’t finished with her education, learning, or being concerned with the welfare of others.  While preaching at the Methodist Church in Dennis, Massachusetts, on Cape Cod, she went on to earn her medical degree from Boston University as well.  Now as a doctor, she went to the back streets  of New York to learn about and help suffering families.  She had been an avid supporter of temperance in Massachusetts, teaching and lecturing about the sacrifices women and children had to make because of booze.  After seeing women and children suffer at the hands of brutal drunkenness, Shaw became an active member of Women’s Christian Temperance Union, WCTU.

In 1886, Shaw became friends with Susan B. Anthony.  Shortly afterward, she became involved in the National Woman’s Suffrage Association.  She became an advocate for merging the National and the American suffrage groups  to gain power.  In addition, at one point, Anthony saw how torn and tired Shaw was serving both temperance and suffrage.  Anthony suggested that for the time being, Shaw should work on one project at a time.  The minister/doctor weighed her choices.  She saw that if women had the vote, maybe that would empower them enough to fight for their families’ welfare.  Anna Shaw left WCTU as active campaigner to become totally dedicated to suffrage.   Two years before she died in 1906, Anthony stepped down, and Anna Howard Shaw became president of the National American Woman’s Suffrage Association.

Maude Porter, in my recently released, Pins & Needles, fights for women’s rights as well.  The setting is 1909-1910 in the river village of Clearwater, Minnesota. She sees first-hand problems tumbling out of Pat Quinn’s Saloon right across from her millinery shop.  She is an active member of both the Minnesota branch of the National American Woman’s Suffrage Association and WCTU, which has put her in the spotlight, causing trouble for her with drunks who do not want any more temperance or suffrage meetings in town.  Although Maude initially believes education is the key to waking up the world about the influence of drink, she soon realizes prohibition is the answer. Like Anna Howard Shaw, Maude discovers she can only fight one problem at a time. For now, she advocates for Quinn’s Saloon to be shut down.

Last fall, on election day, I overheard a woman say she didn’t vote.  I was shocked! I wanted to shout at her that she threw her vote and I wouldn’t want to hear an argument about the outcomes.  (You’ll be happy to know I didn’t raise my voice or criticize her.)  I thought, oh, well, I guess this is why I write what I write –to help others understand about historical women and women’s issues.  I was never an immigrant learning a new language and new ways in a foreign land.  I haven’t had to fight my way to get an elementary education. But I’ve had to have my dad co-sign his name to my bank loan for a  car  when I made more money  than he did.    I’ve had to fight to have only my name listed on another car loan when the Ford dealer  assumed my husband was the only one to drive. I also was told that my first teaching position didn’t usually pay women the same wage contract as a man.  Like Maude Porter believed, way -way back, we women still have work to do in order to have our voices heard and counted.

I’ll be speaking at the League of Women Voters—St. Cloud February 16th at the Marriott downtown St. Cloud.  This is the annual membership conference, and all are invited.  Think about joining.  The two websites explain their purpose.  The meeting starts at 4;  at 4:30 I’ll be talking about Minnesota Main Street Women–the theme of my novels–Scruples & Drams and Pins & Needles.  These women knew they were nearly powerless.  In Scruples, we learn Jennie Phillips, the protagonist, has passed all her state tests to earn her pharmaceutical license, but Minnesota won’t issue her this certificate because–she is a woman.  Both Maude and Jennie know what they and others need–legal rights, access to medical knowledge, avenues for education to better themselves, and the vote.

One fight at a time, one foot in front of another. . .that is what women have done since time eternal. No one should forget what has been done for you already, nor take it for granted. Democracy is our vote for a voice in this nation. And for those who don’t always take the time to put X’s by people’s names they hardly know,  they are not sure about how to vote their opinion, or they don’t think their vote counts, they can contact a League member and ask them where to find information about the candidates and the issues.

Without this opportunity to express opinions, all people are powerless. Women have been silenced many times before,  and even recently, like Elizabeth Warren, while she was reading a speech by Coretta Scott King, a Republican leader basically told her “to shut-up.”  The response was “outrage,” and the term “Nevertheless, she persisted,” popped up on coffee cups, t-shirts, and magazine covers.   Women had a new fight with new ammunition.  Women’s voices do count; we won’t be silenced. 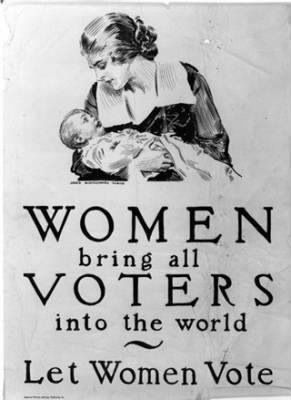