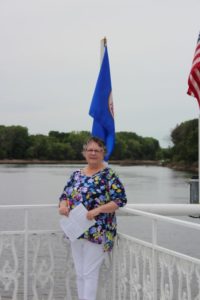 My sister Becky took this picture of me along with other pictures and posted it and the following on Facebook after our trip on the Mississippi area of St. Paul.

“Now where the heck is Cindy Stupnik looking for plots? She is smack dab in front of Pike Island and can’t decide if she should go to her right and visit St. Anthony Falls or head left to Fort Snelling. There are people to discover at both places. People that will settle the western frontier as well as Clearwater, Minnesota, “Hub of the Universe”! Tales to be found and tales to be told….. and some are true. Adventure awaits….”

Early in the week, my sister Becky and I took a trip up and down the Mississippi River by St. Paul, MN.  This has been on my bucket list for quite awhile. We had a grand, albeit slow, journey suitable for history buffs.  Mondays are $10 so it is a reasonably cheap ride. On top of that, when do we ever get such beautiful weather in June–mid 70’s?  The sun refused to shine, but we were comfortable and happy to see some of the original and oldest parts of  St. Paul.

I mistakenly thought we would also be heading further south to Ft. Snelling and the Sibley House on the Minnesota River.  Despite this, we learned so much. I’ve read Maud Hart Lovelace’s Early Candlelight ‘s novel a number of times, and she describes the area so well.  Like DeeDee, the protagonist, I wanted to also look up the bluffs on the Minnesota to where  Ft. Snelling stands.  Another famous spot, down and across the river, is the Henry Sibling House and the Fairbault House, to name just two, which are some of  the oldest structures in Minnesota.  I have visited both Fort Snelling and the Sibley Historic Site, but I wanted to see  it all from below on the river.

Unfortunately, our cruise’s itinerary did not include these sites so I have to rely on my memory. Goodreads says:  “This historical novel set at Old Fort Snelling in the 1830s is a rich and romantic re-creation of the early settlement period in Minnesota’s history.”  This is a work of fiction.

Last week, I read a non-fiction, autobiorgraphic work,  Early Days at Red RIver Settlement and Fort Snelling by Barbara Ann Shadecker Adams.  She, too, writes about this early day before Minnesota became a state in 1859. Her perspective is from her own experience set in the same time about 1830’s but from her own memory.   She, too, talks about the people and places that give life to this early time in Minnesota.

So, I’ve mentioned places like Fort Snelling,  the Sibley and Fairbault houses, the Red River Settlement, and the Minnesota and the Mississippi Rivers. Now let me mention another person–Pig’s Eye. Both books talk about him.  Pierre “Pig’s Eye” Parrant was a retired fur trader who took up settlement on the banks of the Mississippi where St. Paul begins.  Neither author show him much respect, to say the least.  He supplied booze to anyonewho had money to buy.  The site Minnesota Fun Facts reads, “’Pig’s Eye’ snuck over territory lines and found this rather convenient spot from which he could sell bootleg whisky to soldiers and Indians without ‘the pale of law.’ In 1838, Parrant erected a cabin at the mouth of the cave [on the Mississippi River] to sell liquor from.” Locals called the area “Pig’s Eye Landing” based on Parrant’s popular tavern.   Despite his lack of character development,I had fun seeing this area, the future St. Paul,  on our cruise. So why all this interest in this part of the state and these white settlers who came to the newly opened area west of the the great river first?   It was a drop off point. From St. Louis north, the Mississippi River carried many  pioneers on its back to step off on its shores. Others from points east also rode the steamboats north and south to find  new homes.

Here travelled my characters into the area for my next novel, a prequel to the other two that are part of the Minnesota Main Street Women’s series.  I decided to write a prequel because Clearwater and Minnesota had a few first women settlers, one is my protagonist is.  I hate to leave you hanging for another year before you know she is. First, I wrote about Jennie Phillips, the woman druggist in Clearwater.  Her story takes place in 1895, and you can read for yourself the story line on my site.  The sequel was about Maude Porter, one of the first girls born in the village who stayed put–never married and never moved out except for when at the age of 102-3 she went into a nursing home.  Her storyline is set in 1909-10.  Now, DRUM ROLL, I am writing about Maude’s mother, Abigail Perkins Camp Porter 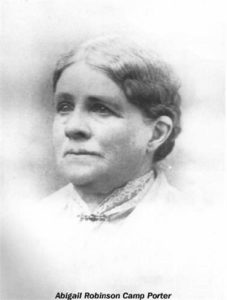 This first woman in Clearwater, came in 1855 to become the housekeeper for the townsite hotel owners, one of which was Simon Stevens, a founder of the village and brother to the father of Minneapolis, John Harrington Stevens.  This book is still in progress–and I continue to research as I write.  Abigail’s story needs to be told as well as I can because as I dig, I find her remarkable because of the the strength, courage, and momentum she had to come nearly half way across the country to start all over again as a recent widow.  I can’t give away too much, but I promise I will stay true to her as another strong female protagonist.

I love what Ruth Benedict the anthropologist/scientist once said, “I long to speak out the intense inspiration that comes to me from the lives of strong women.”

This, too, is my desire, my direction, and my ultimate destination.