Last night, I listened to this song on my Sirius radio as I drove home from shopping.  One of my favorite songs, I can remember when, where, and why I heard it first:  Lake Harriet, 1966. like a lot of Clearwater girls, I was a nanny for a family who lived on a corner a block or two from the lake. 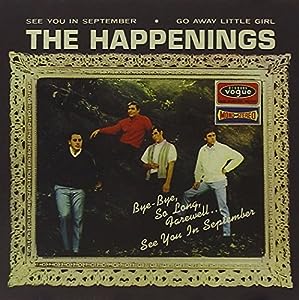 I’ll be alone each and every night
While you’re away, don’t forget to write

See you in September
See you when the summer’s through

http://See you in September See you when the summer’s through

This would be my second and last summer down there taking care of the couple’s four children.  I had left a boyfriend (seriously–can’t remember who) and so many friends back home. Besides having a very good friend somewhere across the lake (neither of us can remember what their names were, but the family was related to my summer family somehow), I was lonely.  I got paid every week $15.  The father of my new family was a lawyer, and eventually, became a judge in Hennepin County.  Some said he was a tough and rough-mouthed attorney and judge.  But he was always kind to me.  He was seldom home except for mornings, returning from his office late at night.  I once did a wicker basket of ironing for them.  His wife who was also very kind gently requested I not iron his shorts with starch anymore.

I kept in touch on and off.  I stopped to see the family when I worked for North Star Abstract downtown Minneapolis, close to where the Metrodome was built and close to the Hennepin County Court House. On occasion, I bumped into the lawyer-husband down there as well.  Time went by, and I moved back home, closer to my new job with NSP (now Xcel) at the new Monticello Nuclear Plant.  I knew there were controversies about this new state endeavor, but seriously, at the time, I felt safe.  I had to wear a safety badge measuring any radioactivity I could be receiving, these hard-working chemists, engineers, and scientific experts in their fields were all authorized and kept us safe.

One night some information (I can’t remember what anymore) got out and was covered by local newspapers, television newscasters, and even the nightly world news. The next morning, the gates nearest to the main building where I worked were lined with protesters, carrying and waving picket signs, voicing their concerns for the safety of the world. I was ushered toward the gate by one of the guards. Ignorant of all the concerns or feeling safe in the arms of those who made me feel safe?  I was too busy typing manuscripts, procedural manuals, and letters to various government oversite people and taking oodles of phone calls as the plant’s secretary to the supervisor and receptionist to really pay much attention.  Yet, I soon learned out there against the line that tried stopping me from entering the building was my former employer’s wife. Maybe she was a protestor all along, but apparently, over the years she took on many causes.  Many years later, I learned the couple had divorced.  Yet, he defended her and even a couple of their children who protested with her.

Isn’t it funny how certain melodies and lyrics, songs remind you of things?

Well, tonight is the end of our summer vacation. The Minnesota State Fair ends tonight. My grands start back to school this week.  The nights are cooler, and the days are not as hot as they were.  I will continue to sell books online at cynthiafrankstupnik.com, and at 3 more September events.

Schedule for the remaining days of September:

September 18, Becker at the Faith Lutheran Church for Fall Festival and Heaven on Wheels Cars Shows, 10-2

September 25, Sartell at the Sartell Community Center, from 9-3.

And I hope to

See you in September
See you when the summer’s through

in Rice, Becker, and/or Sartell