Today, I came across the post (below) about COURAGE in my feed. I posted prior to responding. Now I am responding because I really took the time to think about it. The original post will reappear below my blog.

I never thought about six types of courage before. I always figured courage = courage. But now I see the six categories and realize I have been tested in all six. I won’t bother with every detail; I know you thank me for it. Some I passed with flying colors, some I passed by the skin of my neck, some I am still working on, and some will be marked by the test of time. In one instance, I feel, my whole BEING was tested in all the following categories at the same time.

One time, I felt my whole character had been challenged. I’d never in my life felt so alone. I wallowed in the pit of despair for quite a while. I still wonder if I passed the test completely. Judgment, rationality, emotion, trust, and even physical–because a disability that everyone who knew me knew about–came into play. All of this brought me to my proverbial knees. I called upon Him on throughout this ordeal for He reminded me to “call upon the rock from which I’ve been hewn.”  I clung.

When I gathered myself together after the attack, I realized I had to face the enemy, but how? I had to dig deep for the courage I needed to go back to the scene of the crime the next morning as frightened as I had ever been. Unfortunately, at this stage, I trusted no one. I did my job and stuck to it. Little by little, I talked to whom I thought I could trust. I did not go to the top for I do not have a voice that can persuade kings. I used the power I had, my pen, and documented everything and found someone who could be the power behind me. I had to stand straight, be tall, and appear strong. A doll collector for years, I felt as though I was being propped up by one of my doll’s metal display stands.

I went through many emotions during this ordeal but realized my real fight was moral, my character was on trial as well for I had been tested on lies and another’s failings. Again I intellectualized and internalized everything and continued to speak to only those I knew I could trust. Let me tell you, I talked it out and out and out. Thank you to–sister, husband, sons, and true friends–for listening.

Even though I wanted some truth, I never truly found how the ordeal came to its fruition. I heard bits and pieces and knew I had to keep on in peace and quietness (except with those I trusted). Everything I had worked so hard to build had been tested and had come into play. I used John Proctor from Arthur Miller’s The Crucible as an example when talking to my children and students.  For those who know the play, they know Proctor has done lots of things wrong. Yet during the groundbreaking events of the Salem Witch Trials, he will confess to being a witch if it means he can save his family from further hardship.  Yet, when it comes to signing a confession and hanging it on the church door for all to see, he won’t do it.  To Proctor, nothing is worse than a tarnished name. That is–if we are stripped of everything–our names will be all we are remembered by. I was standing in the same place. I did not want my name or my character to be tarnished either. 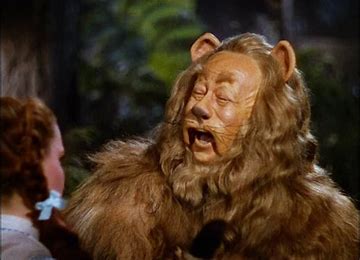 At times, I still feel like the Cowardly Lion in this scene from the “Wizard of Oz”:

Dorothy: My goodness, what a fuss you’re making! Well, naturally, when you go around picking on things weaker than you are. Why you’re nothing but a great big coward!
Cowardly Lion: [crying] You’re right, I am a coward! I haven’t any courage at all. I even scare myself. [sobbing]
Cowardly Lion: [singing]
I’m afraid there’s no denyin’
I’m just a dandy-lion
A fate I don’t deserve
I’m sure I could show my prowess
Be a lion, not a mouse
If I only had the nerve.

So, am I a mouse or a WOman? Coming out on the other side, I remember how hard it was to stand alone. I suppose I learned I had some courage, but I also realized I can count on my own discernment and insight to call on stronger forces when necessary.

What has so unnerved you that you stopped to question your own purpose?