–TO RECOVERY–For those who didn’t know–

I finally had a knee replacement on May 3.  Many of you saw me hobbling around.  I’d have good days and bad days, but this winter was the worst. Not only had I needed this surgery for quite a while, but the knee had caused my ankle to degenerate from the reconstruction I had in 2005.  This caused my podiatrist to have a brace designed and cast for me to wear to protect my ankle from further issues.  My doctors, family, and I took special precautions in order to commit to my recovery–blood thinners due to a previous pulmonary embolism, intensive, in-house rehab physical therapy for 2 weeks 3 times a day, and when I was released to go home, lots of care and more physical therapy 3 times a week with my favorite PT.  After 8 weeks of physical therapy, I’m doing great, and better yet, NO BOOT to protect the ankle. 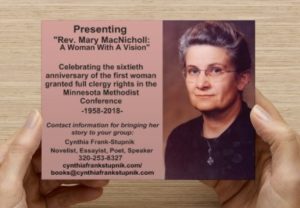 I am putting the final touches on the powerpoint slide presentation for the first woman to be fully ordained in the Minnesota Methodist Conference in 1958. Most of you know that I earned a grant from the United Methodist General Commission on Archives and History to write her story.  Little did I know that this woman, Mary MacNicholl, who would be my minister in Clearwater, Minnesota, in the 1960s, had broken through her own ‘glass ceiling’.  How did I know back then our church community would be served by such a celebrity?  Not sure I or anyone else knew Mary Mac’s impact, but I know I felt honored to be noticed by her when I sang in the choir, attended Methodist Youth Fellowship,  enrolled in our short confirmation class (Methodist youth usually have only a six-week education), she came to my graduation party, and when she often stopped to have coffee with my mom. She awoke our consciences, our awareness of the world around us, and our knowledge of our Methodist tradition.  Sixty years after her ordination and forty years after her death, I hope to do justice to Mary MacNicholl’s story and service.  The essay is ready to be sent to the United Methodist General Commission on Archives and History.  The new and improved powerpoint will be tested when I speak at Wykoff United Methodist Church.  This was one of the three churches Pastor Mary MacNicholl was charged with after she graduated from Drew Seminary in  1949. I will be presenting her story on July 21 during the church service at 8:30, a.m. 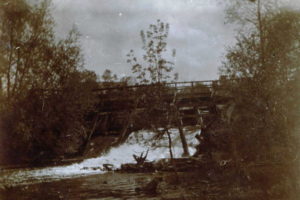 I was busy up to surgery–actually, less than a week before I sold my books at the St. Cloud River’s Edge Convention Center.  Then the hiatus. Now, I am excited and ready to begin my busy time of the year–July through November.

After I present Mary MacNicholl’s story in Wykoff, I’ll be bringing my books, Minnesota Main Street Women series–Scruples & Drams and Pins & Needles, Around Clearwater, and Postcards from the Old Man to sell at the Clearwater Heritage Days at the Rendezvous at the dam, off Highway 75 and the north end of Main Street, Saturday and Sunday, August 3-4.

Come see me at the Clearwater dam where I’ll be participating in the Rendezvous. Here where the Clearwater River merges with the Mississippi, the village was first created.  In the 1850s, sawmills lined the banks and built the first houses and store buildings.  Feed mills, sawmills, stores of all kinds– hardware, general merchandise, jewelry, clothing, shoe, and furniture sat on the banks of the Clearwater or up on Oak Street and Main Streets.  These buildings and the people who occupy them are the subjects of my Around Clearwater history and Minnesota Main Street Women series. Each protagonist, Jennie Phillips in Scruples & Drams and Maude Porter in Pins & Needles,  a real woman pioneer from Clearwater, made her mark on the community.  They both see gender inequalities in the world as far as suffrage, health, education, and legal issues.  Their desire to make things right for the women and their families they encounter is a major theme in my series.

If you want to know history, Arcadia Publishing’s Image of America: Around Clearwater is the most up-to-date word on early Clearwater.” Burrowed below bluffs overlooking the Mississippi and Clearwater Rivers, Clearwater’s houses, its churches, and most of its original businesses resemble those that settlers had left behind in the East. With its arch-like trees sheltering Oak and Main Streets, the community remained home to many who lived and died there and those who had moved on only to return for yearly Old Settlers gatherings. This sense of community allowed Clearwater to thrive. Flour and pulp mills lined the shores of the Clearwater River. Mercantile, hardware, jewelry, and drug stores cropped up, providing the products for a growing community. Trade once powered by steamboats on the Mississippi was taken over by James Hills Great Northern Railroad. While the village and surroundings have changed over time, the original charm is still there, ready to be explored again.”

–WITH SOME FINAL THOUGHTS–

Speaking of Clearwater, Minnesota’s heritage that I have been writing about for a number of years, Clearwater’s Heritage Days is coming up August 2-3, with the Rendezvous lasting through Sunday.  Along with coronation activities going on before the celebration begins, the parade comes back to downtown Clearwater on Friday night at 7:00 beginning at the Clearwater Dam.  What a great move back to come back where the village began by the Clearwater and Mississippi Rivers. The parade route will begin there and end up at Eagle Trace Golf Course.

This length of Main Street will take you by many of the historic sites– past the Boutwell Hardware and Pat Quinn’s Saloon (neither are standing–that I write about in Maude Porter’s story, Pins & Needles.  It will take you past the historic United Methodist Church  I attended when I was in my youth, and down to the drug store (now an apartment building) I write about in Jennie Phillips’s, the woman druggist) story, Scruples & Drams.  Three blocks further you will come to the Thomas Porter home and farm that he built beginning in the 1870s. He was a fur trader, farmer, village treasure and besides serving Wright County, and served in the Minnesota Legislature for a few terms.  Your final stop will be at Eagle Trace Golf Club, which was his original land that extends down to the Mississippi River.   I had trouble with the golf club’s webpage but this gives you at least the location: 1100 Main St.      https://www.yelp.com/biz/eagle-trace-golf-and-event-center-clearwater

Come join us for some fun.  I’ll keep up better from now on and let you in on the different spots I’ll be located over the next few months.

The Mississippi River flowing by Clearwater, Minnesota
A couple weeks ago, I heard second-hand that St. Cloud is thinking of developing a walkway from around downtown to the hospital. When I heard this I thought of San Antonio’s River Walk.  Restaurants, boutique shops, boat rides, this city’s “underworld” is alive with charm.
Until train and car took over, the Mississippi piggy-backed its drifters  north and south, it sent the prized white pine down the river to sell and fill the lumbering industry’s pockets, but  it was a carry-all for so much trash and waste  it became polluted. Then some turned their backs on this great waterway. Thank goodness, laws exist now to protect its health.
It is good to think that St. Cloud will honor The Old Man who has been its loyal friend for so long. The other day, I sat at a boat landing watching the river side-stroke around a few curves as it rolled toward Sartell where it eventually blathers in foam as it spills over the dam. It is alive.

I love the Atlantic Ocean,  and it too inspires me. Sometimes, the waves play at my feet.  At other times they nearly push me over as they romp toward shore with more vigor. I can’t help but visualize my German, English, Welsh, and Scandanavian ancestors sailing away from oppression, tyranny, and near-starvation to start all over again in America. The waters rush at me as if deep  calleth unto deep.

I wrote Steppes to Neu-Odessa: Germans from Russia  Who Settled in Odessa Township, Dakota Territory, 1872-1876 (Heritage Books 1996, 2002) after I moved to the South Dakota.  The Yankton hills draw me in as they bulge from the James River, sloping and angling their way through rich, black farm land.  Here my German-Russian ancestors gathered to begin their lives in earthen huts. So moved by their strength and determination, I wrote:

In quest of home, they roamed Dakota’s range.
From Yankton to Pembina, wagon wheels
dug furrows these tenacious nomads trekked
to claim near-similes of Ukraine’s steppes.

Grooms planted rows of barley, wheat, and corn.
Their wives nursed fragile sprigs of cottownwoods.
Stacks of mischt, the twists of tight-wound hay
became crude symbols of their brutal lives.

These pacifists fought wars against the snows,
against the droughts and fires, the storms of ice.
Once former subjects, nouveau czars of plains,
in black knee boots, stood firm on humble realms.

On page, I transcribe lowly family myths,
then fantasize I enter their domains.
Like Russian thistles tangled in my thoughts,
dwell pioneers whose blood thins in my veins.

While living in South Dakota, I was lonesome at times for the river’s watery presence, I wrote:
Daughter of the Middle Border

Garland writes about my earthy grandmothers
who left eastern hamlets
to follow their wander-lusting husbands
across Dakota prairies.
These petticoat farmers produced the manna,
feeding the men who grappled with the land.
But their own hunger was harder to stave off
without churches, schools, and McClure’s.
North of Yankton, my youthful father tired of treeless plains,
left the rise and fall of the coteau.
Hankering after richer pastures,
he drifted east, sinking his spade in Minnesota’s fields.
Years later, I, like my grandmothers,
trekked to Dakota to work alongside my spouse.
We tilled the land in a different way,
reclaiming their inheritance of Canaan’s blessings.
While home for now may be inside this Harvey Dunn landscape
of azure skies, green-gold desert, and pasque flowers-
I feel Twain’s anchor, Old Man River,
tugging at my veins.
(c) 2002 Stupnik

After a thirty year stint in South Dakota, I returned home to Minnesota to live and write about my first love, where I was born and raised.  Most of my novel/book writing  right now  is about my homeland, Clearwater, Minnesota, the landscapes near the Mighty River, the friends I have/hahttps://tonybennett.com/d, and the history and Main Street Women that inspires me.
What landscape inspires you and leaves you longing to return? Is it Colorado like John Denver’s “Rocky Mountain High?”  Is it the hilly and foggy city that  Tony Bennett sings about in “I Left My Heart in San Francisco?” Or is it the powerful soundtrack of “Legends of the Fall” that beckons you back to the mountains and icy streams of Montana?
All of these places impel me to write, but for me, the Mississippi flows in my veins, mobilizing my imagination.
I welcome you to my new blog site and my new webpage.  Remember, I am available to read and talk for book clubs, poetry readings, panel discussions, and almost all book and craft events.  AND don’t forget to let me know what inspires YOU.