Not sure I’ve told you about Grandma Ina, my mom’s mother.  She was born in 1902 in Ionia, Iowa. She graduated from Nashua High School and received her state credentials to teach at country school at the same time.  After a tornado took the farm in 1918, her parents moved to the St. Cloud area.  She followed them.  Once in St. Cloud, she attended St. Cloud Normal School to be recertified to teach, this time in Minnesota. Eventually, she met my grandfather, had seven children, and then grandchildren. From tiny on, like most grands, I loved this woman. I know she loved and enjoyed me and all her grandchildren; she had the art of making all of my cousins, and brother and sister, (18 of us) feel like we were her favorite.  I sure did.  As a youngster, I took for granted Grandma’s impact on my life.  She and Grandpa were around a lot, coming to many church and school events and hosting many many family events.  It wasn’t until I became older, I learned more about her. 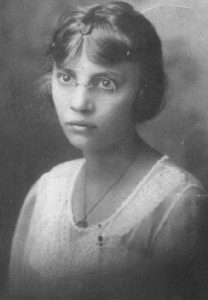 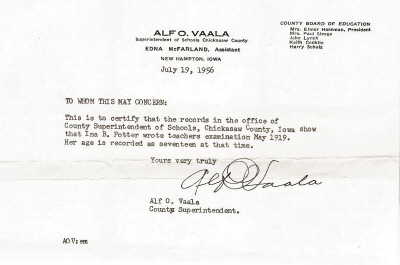 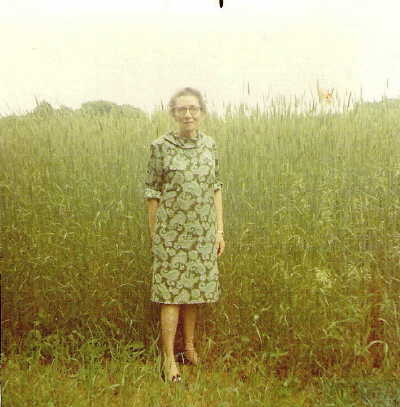 I remember her sweet presence in my life and mostly out on Grandpa’s and Grandma’s farm out in Haven Township, east of St. Cloud.  She and mother gathered to pick vegetables from the garden and what they could can for winter suppers.  I’d wander around the back yard, being watched and warned not to go too far because she and Mother worried I’d fall into the river beyond their house.  Once, for some reason, she and I were left to our own devices.  I followed her to the old pumphouse, probably to gather water for her flowers.  I remember stepping on a slanted board to get up to the building, and when I left ahead of her, I was stung by a hoard of bees. I felt a splash when Grandma dropped her pail and grabbed me.  We both screamed and cried loudly until help came.  Dad caught me up and carried me away, while Grandpa moved Grandma out of the way and with a rake and an old burlap bag moved the nest away from under the pump house ramp. Grandma ran to the house to get baking soda and Mother. Mom held me, as Grandma tended to me with dampened soda made into a paste to sooth the many stings.

Grandma Ina wasn’t a “cool” grandmother.  Only when she was older and became sickly did she wear slacks.  She didn’t take off to have coffee or a drink with other women friends, belong to a bowling team, or even go out dancing with Grandpa.  She didn’t drive.  She went everywhere Grandpa would take her on Saturday. Grandpa worked at the Great Northern Car Shops, so he left early weekday mornings and came home at supper time, which meant she stayed home all day by herself.  She was definitely old school.  She wore nylons and dresses almost always, and at home she wore an apron over it all.  She knew how to schedule out her day. When I stayed with her, we ate, did dishes, ironed (I don’t remember washing clothes or taking them out to hang), during her late morning and early afternoon, she watched soap operas like “The Secret Storm.”  Later, while I read one of the Little House books, she wrote letters or played Solitare.  Before long, it was time to make supper.  I set the table for Grandpa, Grandma, and myself. After doing dishes, I brushed my teeth and took up bed on the sofa to watch television with them until I fell asleep or they went to bed.  Grandma made everything cozy.  That is who she was.

As a self-absorbed teenager, I just assumed Grandma would be around for all my major moments, and she was.  From my brother’s graduation and party after at our restaurant, she and Grandpa were there.  I know she came to my confirmation in the Methodist Church of Clearwater. I am pretty sure she was in attendance at my 8th grade graduation as well, upstairs in our town’s old brown schoolhouse and told me she wept during my class’s processional to the tune of “Pomp and Circumstance.” She came down for Mother’s Day dinner in South Minneapolis where I lived in 1970 while I worked down there.  She was often at our house for Sunday lunch when I came home for the weekend.  And of course, she and Grandpa were in attendance for my wedding–always there with love, hugs, and kisses. 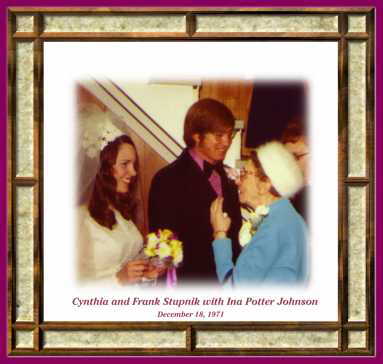 It wasn’t until years later, I learned more, bit by bit, about Grandma and gained more esteem for her.  She was, like I said, home and heart.  She had strong ties to her family, whether they lived in Washington, England, Iowa, or off the coast of Japan.  The door was open her friends and family. When her son, Dick, went hunting duck or pheasant, she cooked up a feast.  Thinking I was eating delicious beef, I found out it was duck.  The gravy and potatoes pulled the meal together.  Somehow, she eased me into eating wild food without me freaking out, and I could tell stories of how obstinate I could and can be around the dining table. She created many culinary pleasures in a kitchen that came out of early 20th century The Ladies Home Journal–homemade cabinet for dishes, sink, small refrigerator, gas stove, and low enamel table, and a unlevel linoleum-covered floor for putting a meal or desserts together. HGTV home designers would shun her farmhouse.  Besides the old- fashioned kitchen, her house was tiny, but sufficient for her and Grandpa. When company came, we did the best we could to gather around the table for holiday meals. 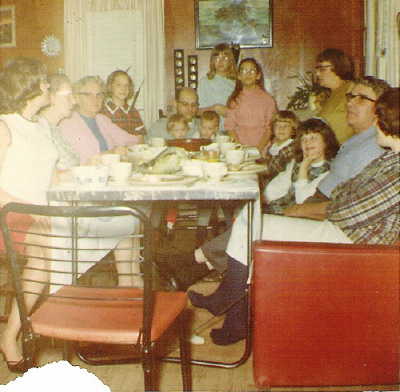 So many memories…like most of you have of your grandparents, you received love and acceptance from them no matter the attention you gave to them them.  My sister Becky and I wondered why we never took Grandma out shopping or out for coffee by herself.  Probably because as the two retired, they became more of a pair, and we couldn’t take one without the other.  As a teacher, now retired, I wish I’d asked Grandma what it was like to teach–the discipline, the subjects and how the students were prepared to learn.  I remember her playing the piano and then sending it to our house for me to learn on.  I never thought of asking her what it felt like to vote, for she was a woman of that time.  There are so many things I’d ask her now if I had a chance, and I’ve heard that said by many of us.  Although, I began to write about a  strong, influential woman like those I write about in my Minnesota Main Street series  during March Women’s History month, I decided to talk about another type: The mother, grandmother, wife, aunt, sister, and friend, like most of us have had in our lives, that have stayed by our sides, and left their hugs around our shoulders, their kisses on our cheeks, and their touch on our hearts and minds.

Welcome to two immediate book-selling events that are coming up: