Paul Peterson sang “My Dad” during an episode of The Donna Reed Show.   Although sung from Jeff Stone‘s teenage, male point of view, (he was the son of Donna and Dr. Alex Stone), he speaks for many of us females as well and our adoration toward our fathers. As the lyrics go, my dad, Harold Frank, may not have been, “. . .much in the eyes of the world; He’ll never make history…But he [was] the world to me.“

He had a rough beginning, but he seldom dwelt on it.  Maybe I’ve blogged about Dad before.  He was born and raised on a farm north of Yankton, South Dakota, to Fred and Anna (Hauck) Frank, children of immigrants from Russia. Both of his parents’ had strong family ties with lots of friends and relatives in the Yankton, Scotland, and Menno areas.

An article in the February 14, 1920 Scotland Journal announced that the area had been free of the flu so far that winter.  Less  week later, my dad’s family all came down with the dreaded virus.  Grandma and Grandpa Frank died on the same day, February 21, 1920,  with Dad’s little brother Eddie dying on the day of his folks’ funeral.

The three living Frank children went to live with Uncle Chris Hauck in St. Cloud, Minnesota. Aunt Leona was nine, Dad was seven, and Aunt Ramona was two.  Later, the children were split up and fostered by different families. The picture below on the left was taken after Aunt Leona’s confirmation and the last day the three siblings would be together for many years. Aunt Leona’s family moved to Idaho.  In fact, even though Dad and Aunt Leona corresponded, they didn’t see each other for forty-five years.

Dad stayed with his foster parents near Scotland until he was twenty-one when he moved back to the St. Cloud area and eventually met and married Mom, Winnie Johnson. (The picture of him on the right was taken when he still lived in South Dakota. Handsome devil, wasn’t he?) 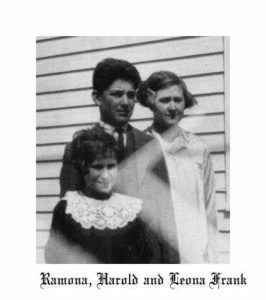 As the song goes . . .Dad may not have “been much in the world,” but he was the world to me and my siblings.    He went to work  every morning clean as a fresh-washed copper penny, and after working hard in a hot iron foundry, he  came home every night covered in black dust.  He taught us right from wrong, taught us about his love of  God and the Bible, guided us in faith, and he modeled a life to be followed.  He was a quiet man with few wishes or needs except for a good chair to hang his leg over while he read his newspaper, a transistor radio to listen to his Minnesota Twins, a good hamburger anytime, and a beer to quench his thirst after mowing the lawn.

He also told us about our German-Russian heritage, which had been taught to him by his parents and later by his foster parents who were his first cousins.  So important to him that it was important for my sister to begin researching our lineage.  I took over when I moved to South Dakota.  I eventually found that our Frank, Engel, Jasmann, Mueller and other relatives were the first German Russians to come to Dakota Territory in 1872 and settle in Odessa Township, Yankton County.  I wrote Steppes to Neu-Odessa: Germans from Russia Who Settled in Odessa Township, Dakota Territory, 1872-1876, a biographical dictionary of these first settlers.

A bit of the orphan came out at times–like when Dad remarked that he never thought he would be so lucky to have a family.  But I can say we, his children, were the lucky ones to have such a good father.

The Tin Can
My child, do not forget my teaching,
but let your heart keep my commandments . . .
It will be a healing for your flesh
and a refreshment for your body
Proverbs 3: 1, 8

Round, red, black, and gold container,
bottom rusted, lid twisted askew,
the Watkins carbolic salve
rested on the shelf above the basement steps–
next to Dad’s pint.
He self-medicated:
Burning swigs for sore throats,
Vicks rubs for coughs,
Hilex baths for itch and ground-in dirt.
The old man had cures for all our family’s ailments.
But for me as a small child,
the tin that held the brown muck,
stinking of gasoline and spruce, contained a mystery.
Whether I had a knee scrape, bee sting, or poison ivy,
and while I wept in pain, Dad performed his magic.
Bowing as if in prayer, he carefully wrapped
my wounds with a Band-Aid, gauze, or clean rag.
Before long, I was out playing again,
paying little attention to God’s healing power
delivered through my father’s hands.