Today, two  WCCO news guys, Matt Brinkman and Jason DeRusha, reported from Lake Minnetonka on the segment “Goin’ to the Lake.” They talked a bit about the lake’s beauty, the great food outlets along the shore, and supplied a short history of the area. I was  a bit dismayed when they started with Prince–even non-cult followers like me know “Purple Rain.”  They gave the audience a Wikipedia-like summary of its early history, mentioning early “settlers.” I know this is history, Minnesota’s history, and I know they don’t have lots of time to say everything on air, so I get it.

Of course, Native Americans were the first to settle here–dating back thousands of years.  They treasured and honored the vast hunting grounds and this huge crystal-clear lake for the sustenance it provided. I doubt they would have dealt with lake disease like e-coli.  Yet, and who and what the newscasters didn’t mention was Clearwater, Minnesota’s future founder Simon Stevens, brother to the “Father of Minneapolis,” John Harrington Stevens, who owned land in and around Clearwater as well, both of whom I write about in my historical Around Clearwater.   Simon and Calvin Tuttle were two of the first white men to explore and settle this area.  They followed what is now called Minnehaha Creek west until they found this huge body of water Native Americans had told about. Once here, they built a sawmill, thus beginning the initial settlement; “Minnetonka has a long history stretching back to the mid-1800s when the first settlement was established along Minnehaha Creek.”

Little has been written about Simon or connect him to this site, very few people connect him to brother John Harrington Stevens,  and few know he was such a historic character who made so much happen in Minnesota. Without him and others like him, Clearwater might not have been founded.  This weekend, Friday, in particular, Clearwater celebrates its heritage, and like days of old, the town sponsors a kiddie parade.   After a long postponement, both the kiddie and the grown-up parade are back, where I think it belongs because of the word HERITAGE, downtown Main Street, where the town first began running parallel to the Clearwater and Mississippi Rivers.  So here is a brief identification and synopsis of the parade route.  Follow the Grand Marshal, Elaine Paumen, and take notice of the town that used to be. (By the way, you can gather more information about the sites in my AROUND CLEARWATER historical.) 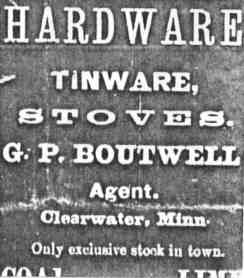 Boutwell’s Hardware Store sat on the corner, a few hundred feet from the ferry landing. Upstairs, Maude Porter had her millinery store, as I wrote about in Pins & Needles.  Across the street sat Pat Quinn’s Saloon and the Whiting Building–none of these buildings are there anymore. 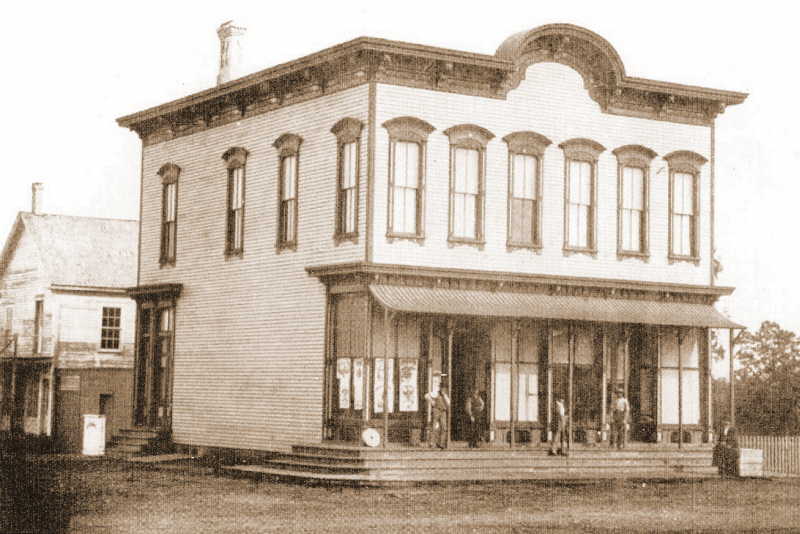 To the west is the Masonic Temple–still standing– that houses the Masons upstairs, and hosted a variety of different businesses –general mercantile, beer parlors etc. 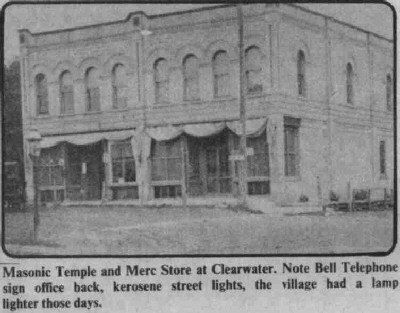 3.  From here, you’ll see a variety of landmarks and areas where some used to be.  You’ll go by James Lyon’s house and store. Many of the town originals remember it as the Solinger home –(where it is now all lit up and entertains with yuletide music at Christmas)–

Jessie Maude Porter’s last home sat next to Solingers but that too is gone. 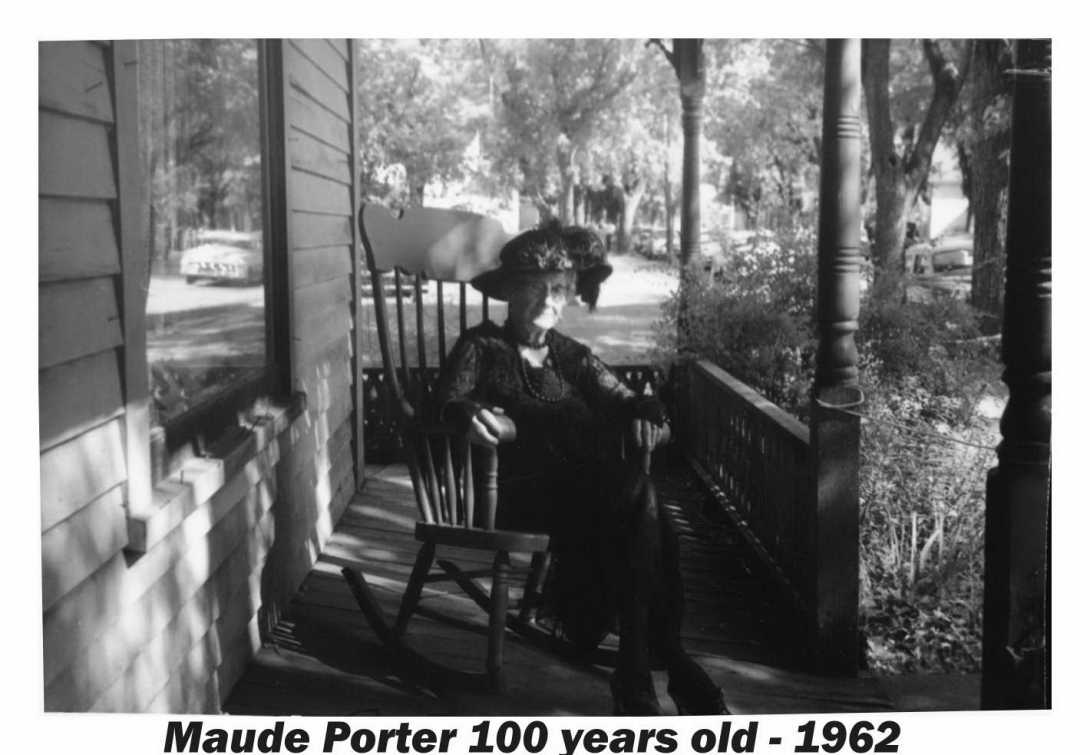 She was daughter to T. C. Porter and Abigial Camp Porter, early towns founders. Maude lived to be 103, was born, and lived all but her last year or so in Clearwater.

Kitty-corner is the United Methodist Church on Elm.

A building or two down is another hardware store that is now owned by potters. When I was young, we often went here to buy nails, a stash of gifts, and just about everything else. And next to that is now a business office but it was once a bank as well.

Across from here at an angle are an old home and meat market, once owned by Luther Laughton–a name very well-known to the early citizens. 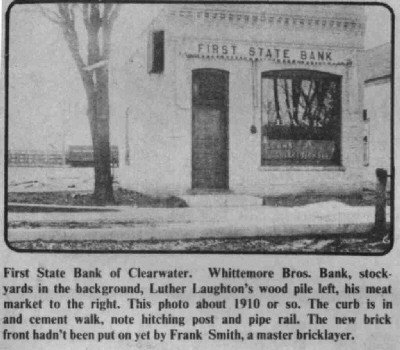 Next to this building on the corner stood the Lyons’ Mercantile. When I was a kid, the post office sat there. 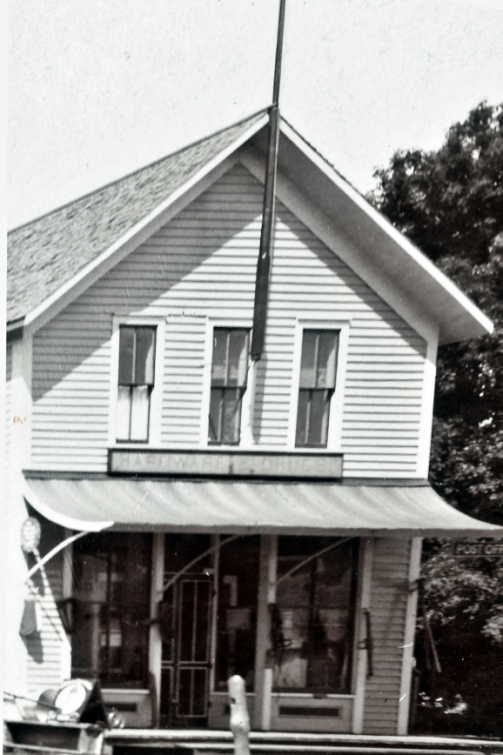 here with #3 because this building which now houses apartments was the Phillip Drug Store that I write about in Scruples & Drams   http://www.cynthiafrankstupnik.com/product/scruples-drams-novel-minnesotas-main-street-women/.  On the corner of Maple, this historic building has lived many lives.  Drug store, Kniss Grocery, and now apartments to say the least.  Right next door was –not so historic–Tri-County Lumber. Directly across the street from Phillips’s stood a hotel that burned down and was replaced by another grocery store, and then variety store.

4. Nearly at the Next block–Ash–was what early and old villagers referred to as the Black Smith Hill, named for all the blacksmiths that worked their trade in this area.  A large house on the Corner  is a large home once owned by the Banker Shaw.  It was sold many times and often remodeled. Across the street, mid-block, was the Phillips’s home.  Jennie and her father Stanley, as well as the rest of the family, trod back and forth many times a day from home to drug store as I told in Scruples & Drams.  Most of the houses that line Main Street are historical, many have been remodeled, and many empty lots still sit waiting to be built on. Clearwater Outfitting can be seen off Pine Street.  It is housed in the original creamery building.

5. You’ll find yourself coming to almost the end of your parade route soon once you go under the bridge, which has a historical life all its own. Thomas Porter owned much of the land from her on until you reach the Eagle Trace Golf Club.

Thomas, Abigail, and Maude Porter provided a home across the street for friends and relatives in their large home once it was built in 1871.  This large white structure is on your right close to Porter Circle.  After Maude moved out in 1910, Frank Kothmann owned it and most of the land.

Finally, you’ll be pulling into Eagle Drive on the left.  Here you’ll be entertained even more Friday and Saturday, Aug. 2-3.  The Rendezvous will start Saturday and go though Sunday.  All the specifics can be found at https://www.facebook.com/events/498211524260628/.

Back to Simon Stevens….without his foresight and adventurous spirit, he may not have come to Clearwater.  But this beautiful landscape surrounded by water wouldn’t have been unfounded for long.  Stevens may not have had a big name written in many history books like his brother,  but he took on every job the town gave him, built a large farm, and had a strong family that carried on his name for years to come. 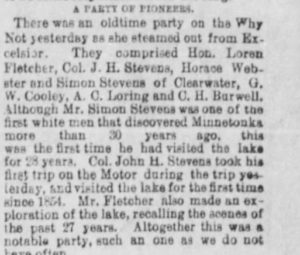 More information can be found in my Around Clearwater.

Thanks to Clearwater Remembers and Monticello Times for a couple of the various pictures provided.