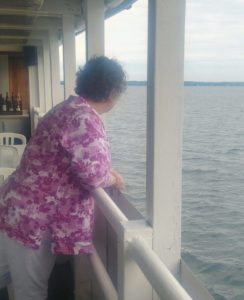 1 if by land, 2 if by sea…. Cindy Stupnik
is @ it again. Looking for clues on Lake Minnetonka…
Is she trying to find the footsteps of Simon Stevens,
founder of Clearwater and also the first white man
to lay eyes on Lake Minnetonka?
Is she looking for his mill site on Gray’s Bay
@ the headwaters of Minnehaha Creek?
Or more likely has she spotted the alcoholic beverages @ the bar…?
More adventures in the making.

This huge body of water, circling the shores of many lovely towns like Excelsior, Deephaven, Wayzata, and Shorewood has intrigued me ever since I learned about Simon Stevens, Clearwater founder and brother John Harrington Stevens, Minneapolis founder.  Both men were born and raised in Brompton Falls, Quebec, Canada.  John Harrington, the older of the two, became colonel in the U.S. Army after fighting in the Mexican-American War. Simon followed his brother once he settled in Minnesota and helped build his house, the first house on the west side of the Mississippi across from St. Anthony.

Simon Stevens made his own history. Well-known around Minnesota during his life span, he and a group of fortune-seeking explorers paddled westward from the Mississippi River on the Minnehaha Creek approximately twenty-two miles.  The group portaged around a huge falls, but once they got to the headwaters of the creek, they viewed a huge body of water that would become known as Lake Minnetonka one day. At what would be called Gray’s Bay, they built a sawmill.  Simon did not stay around long but sold his rights to search for his own land to call home.  This would become Clearwater, at the mouth of the Clearwater River that flows into the Mississippi, and the setting for many and most of my works.

A couple of years ago, for a birthday trip, I asked my husband to take me to Lake Minnetonka to find the area where Simon Stevens and others built the mill.   This site has a wonderful hiking path, small dam, and offers lots of historic information, evening mentioning Simon Stevens.

So as I work on my next book and wanting to see if we could find any type of imprint of Simon’s, my sister Becky and I signed up for a cruise on Lake Minnetonka. We had beautiful weather, albeit a bit cool,  and viewed many luxurious homes, boats and their houses. We heard about some of the lake’s history, especially the Big Island where amusement called out to adventure seekers during the early 1900’s from nearly all over the world. Jennie Phillips, protagonist in Scruples & Drams visits relatives and friends in Excelsior, and even Jennie Phillips’s sister Ruthie’s autobiography refers to the the ride around Lake Minnetonka and Big Island Amusement Park:

The summer after my father passed away [1904] Pat [Ruthie’s older sister Harriet] and I were invited to go to mother’s sister [Harriet Ada Crossman] and family who lived at that time in Excelsior on Lake Minnetonka.   We had never been to a large city before so we were quite excited as we had to go to Minneapolis and then change trains to go out to Excelsior. . . I loved the trip over and we stood at the rail of the boat and watched the rainbow in the drops of water as they flew off the paddles of the large water wheel at the side . . .  So many beautiful homes and some places just woods.

We knew already that the park was no longer in existence. Yet, when the captain of our Lady of the Lake cruise ship drew close to the shore of Big Island and mentioned it was now a nature park, I was dismayed; I so wanted to see something of the past.

In past research for Pins & Needles, I learned protagonist Maude Porter’s aunt, uncle, and cousins settled near the lake in Excelsior as well.  Annette Robinson married Mark L. Knowlton.  Knowlton was the Clear Lake, MN, postmaster at the time.  The family eventually moved to Minneapolis and finally to Excelsior where he worked for the Pillsbury Company:

In the early 1900’s, [the Mark Knowlton] family was living in Edgewood at Lake Minnetonka and he would ride his motorbike from the Lake into Excelsior.  (Anyone owning a motorized vehicle in those days was noticed) where he’d park during the day, and catch the train or streetcar into Minneapolis.  The process was reversed in the evening.  In later years the family remembered the good bread that “Grandpa” brought home from the testing kitchens at Pillsbury.

On another trip a couple years ago, my sister and I toured more of Excelsior, trying to find where the Knowltons once lived. We found one house.  At one point in 1921, Mark Knowlton and his son purchased the James H. Clark’s home that was built to become a boarding house [and now is a bed and breakfast–the Bird House Inn] from the children of Clark and his wife. After Mark died, his son “J. E. “Jack” Knowlton who ran a horse and wagon delivery service around the lake via launch,  and was also the proprietor of Knowlton’s Cabin Camp adjacent to the south, at 411 Water Street, from 1932-1948 [took it over.]  His wife, Mrs. J. E. Knowlton,  always had roomers in the big house.  She was born Alice Howard, granddaughter of homesteader Silas Howard, for which Howard’s Point on Lake Minnetonka is named.”

Unfortunately, we saw nothing like horse and wagon, an old-fashioned motor bike, or even a mirage of a saw mill.  Our cruise did not even take us to Gray’s Bay because to get there from where we boarded in Excelsior would take a five – six hour cruise.  Since there is little to no public history tour of the lake, we had to admit that we had researched the people and had seen many  of the sites that were to be used in my next book.  (Please, if you know something we don’t know, let me know.

Yes, I am  in a “hot pursuit” of characters, plots, and history again to bring alive another Minnesota Main Street woman for my next novel.  But I already have the makings of a couple HOT romances, some wiley twists and turns, a few not so nice individuals–with a juicy murder or two–and lots of historic tension.